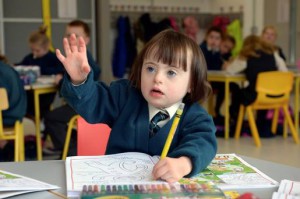 Definition of The Term

Mainstreaming means that a school is putting children with special needs into classrooms with their peers who have no disabilities. According to Wikipedia, this is done during specific times of the day based on their skills. At other times, the special needs child may be studying in a resource room or “self-contained classroom.” In that environment the student has access to more one-on-one time with special education teachers and aides.

Why Do Schools Implement this Practice?

The main reason mainstreaming is done is that the federal government mandates it. In the IDEA program, which is the Individuals with Disabilities Education Act, schools are charged with a concept called “LRE” or Least Restrictive Environment. In short, according to an Education.com article, students must not be discriminated against because of disabilities; they have the right to be educated with the general education population.

Another term, inclusion, has approximately the same intent, but obligates the school to place special needs students in regular classrooms even more of the time. The criteria for deciding how much time is appropriate are subjective and depend upon teacher and education specialist observations. The Least Restrictive Environment is deemed to be placement in close enough proximity to ensure that the students can interact and communicate with one another. Sometimes, though, putting special needs children in the mainstream hinders their learning and, when that happens, the mainstream agenda falls to second place against the primary goal of education.

What are the Advantages and Disadvantages of Including Special Needs Children in the Regular Classroom?

One study noted that students with disabilities had higher academic achievement when they divided their time between the resource room and the regular classroom. The special needs students also had higher self-esteem and developed better social skills. The non-disability peers became more tolerant and accepting.

In general, the IDEA program says that schools must make every effort to maintain special needs students in the general classroom with the aid of supplemental services like teacher aides. It is only when educational goals are not being met that schools can consider removing children to special resource rooms. There are many benefits to these children spending some time in these resource rooms where they get individualized attention, but studies have shown that special needs students profit from time spent in a regular classroom with their peers. The goal of Mainstreaming is to achieve that balance between specialized education and regular class time which best serves the special needs student.